Written by Karen Vergara Sánchez, journalist and member of @AmarantaONG

Original version in Spanish in Marcha.Org.Ar

The protests started with more strength on Tuesday 15. Dozens of young students between 13 and 17 years planned mass evasions in the Santiago Metro, in response to the increase in the price of the ticket and also manifesting a discontent, shared by the population, which reveals the precariousness of life and inequality in the country.

Chile, which in 2016, according to World Bank studies, became the seventh most unequal country of the world, was incubating a general unease that also responds to the increase of unemployment and repressive policies of President Sebastián Piñera and his cabinet, which has constant controversial statements that this week finally ended up exhausting the patience of the inhabitants of Santiago.

This is the case of the Minister of Economic Affairs of Chile, Juan Andrés Fontaine, who expressed to the media, on October 7, that “those who gets up early, will be helped”. With this phrase, he was urging people to get up before 7 in the morning, so they could take transport before the time of higher demand, which is more expensive. This statement ignores the fact that those who live in the periphery already get up at 5 or 6 in the morning, to travel around 3 hours to work

In addition, the Minister of Finance of Chile, Felipe Larraín, responded to the increase of the cost of living saying “well, those who want to give flowers this month, the flowers price have fallen 3.6%,” unleashing the outrage of the citizens. Days before his call to “pray” to revive the economy draw also the attention.

On the other hand, the broad national approval of the project who seeks to decrease the workday from 45 to 40 hours per week, raised by the deputy Camila Vallejo, had demonstrated the weariness that was beginning at home. Traditional television and the media were filled with shameful surveys of businessmen and government politicians pointing out their absolute rejection of the idea. Today, Chile is the fifth least productive country according to figures from the Organization for Economic Cooperation and Development (OECD) and one with the longest working hours.

Although the evasions started peacefully and involving only high school students, in the middle of the week there was a cross-sectional support from the citizens, who  expressed their support for the actions in television and radio programs, despite to the conservatism of reporters and animators of the media, who were trying to stress the dialogue, focusing only in the repressive measures.

They also began to viralize through social networks different videos of the same civilians trying to dialogue with police and explaining these spontaneous mobilizations.

During the afternoon of Friday 18, the protests rallies reached their peak, putting off the police and government, since there is no spokesperson, political party or leader leading the cause. Police forces crowded into each Metro station, causing greater outrage by closing the accesses, throwing tear gas into the subways and beating students. A teenage girl was shot in the thigh, bleeding quickly. The scene was recorded in a dramatic video that was viralized through social networks. She was attended in the first instance by the same passers-by and paramedics of the sector.

With the passing of the hours, images of children with rubber bullets on the face, neck and chest began to appear on social networks. Videos that show the excessive action of police, at the level of pushing a young man down the stairs in the Metro.

This video, recorded in the city of Puente Alto -part of the Metropolitan Region-, shows the excessive action of the police, observing how they drag a child from a motorcycle, across the block where he resides:

Around 9 pm, civilians began to report that Carabineros -official name of one of the branches of Chilean police- had left the Metro facilities, after which fires began at different stations, which at this time, would exceed thirty.

President Sebastián Piñera, who on Friday afternoon would have left the meetings and attended a pizzeria in the eastern sector of the capital to celebrate a grandson’s birthday, had to return to La Moneda -the presidential house- and near midnight made the official statement of State Emergency which gives the military forces faculties to take the streets, and can also appeal to the freedom of assembly and movement. The Major General Javier Iturriaga del Campo was named in charge of this operation. 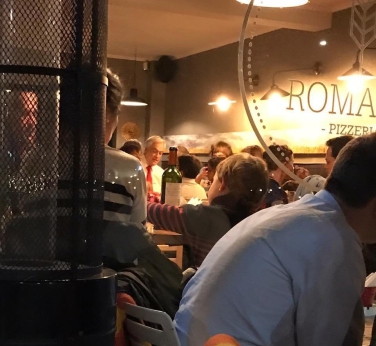 President dinning at the same night of protests.

Iturriaga del Campo is the son of the late Dante Iturriaga Marchese, a military officer linked to Colonia Dignidad -settlement founded in Chile in 1961 by former Nazi military Paul Schäfer, where arrests and torture occurred- in the so-called “Operación Cerro Gallo” and a family that includes commanders involved in crimes against humanity during the dictatorship.

During the night of friday, the traditional media centered their covering in the fire that affected the emergency staircase of the ENEL building -an electricity distribution company-, incident which did not leave any injured, instead of showing the police violence. Although protesters were immediately blamed for this event, Firefighters quickly began spreading photographs of young people spontaneously helping them guide the hoses and instruments to put out the fire.

Until hours of the morning of this Saturday, the official number of wounded does not reveal what has been lived in the streets. They are talking of 11 injured, a very different scenario to which NGOs and human rights institutions are finding. So there’s a calling for all persons who were beaten, detained or tortured by the military or the police to contact the Department of Human Rights of the Medical College of Chile (COLMED) to request verification of injuries.

Trinidad Bravo, a doctor at the San Juan de Dios hospital -one of the main public hospitals in Santiago-, points out that in her emergency shift she counted about 30 people injured during the night and the vast majority of them were under 21:

“We were 8 doctors attending outpatients (when they had major injuries, they passed to the rescuer). We had a 14-year-old boy with pellet wounds. The rest were in category 2 and 3. There were more than 10 injured in the lower extremities by pellets and around 2 or 3 in the morning, a group of 11 teenagers handcuffed arrived, guarded by police officers, who had cuts and bruises”.

Regarding the political-partisan manifestations, there is still no clear articulation from the opposition to condemn the actions of the Government. The situation seems to have taken all sectors by surprise. So much, that even the Intendent of Santiago, Karla Rubilar was only seen at midnight on Saturday, being questioned by a journalist about her absence during the day. “I have work, I don’t have to give explanations,” Rubilar said, unleashing even more the wrath of those who were using social media at the time of the comment.

In regions, mobilizations are being called for next Monday, October 21, and among the demands they are asking for the nationalization of the public transport. The current system is private.

To close this note we share this image recorded Friday night in the Plaza Ñuñoa sector, where a group of police arrived with shotguns and tear gas trying to disperse the peaceful meetings that were taking place, there were children, adults and the elderly. A man approaches without any type of weapon to try to dialogue with the police being pointed directly by them.

After noon, spontaneous “cacerolazos” -demonstration where saucepans are banged as a sign of protest- continue in the downtown area of Santiago. Other cities from Chile, like Viña del Mar, Valparaíso, Iquique and Concepción joined to the protests.

Un comentario en “Santiago, Chile: State of emergency decreed due to manifestations for the cost of living” 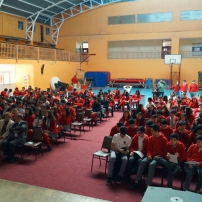 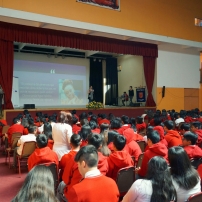 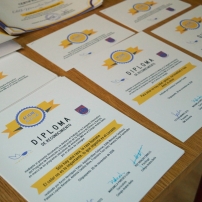